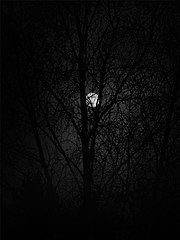 A photo taken at midnight

Midnight is the transition time period from one day to the next: the moment when the date changes. In ancient Roman timekeeping, midnight was halfway between sunset and sunrise, varying according to the seasons.

Solar midnight is the time opposite of solar noon, when the sun is closest to nadir and the night is equidistant from dusk and dawn. Due to the advent of time zones, which make time identical across a range of meridians, and daylight saving time, it rarely coincides with midnight on a clock. Solar midnight is dependent on longitude and time of the year rather than on a time zone.

In the northern hemisphere, "midnight" had an ancient geographic association with "north" (as did "noon" with "south" – see noon). Modern Polish preserves this association with its word for "midnight" ("północ – literally "half-night"), which also means "north".