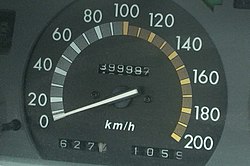 A speedometer from an Australian car, showing the speed of the vehicle only in km/h, as in almost all countries.

Metrication or metrification is conversion to the metric system of units of measurement.<ref></ref> Worldwide, there has been a long process of independent conversions of countries from various local and traditional systems, beginning in France during the 1790s and spreading widely over the following two centuries, but the metric system has not been fully adopted in all countries and sectors.