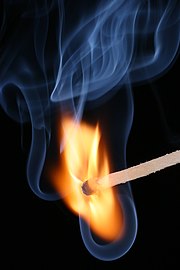 A match is a tool for starting a fire. Typically, modern matches are made of small wooden sticks or stiff paper. One end is coated with a material that can be ignited by frictional heat generated by striking the match against a suitable surface.<ref name=oxford>{{#invoke:citation/CS1|citation |CitationClass=book }}</ref> Wooden matches are packaged in matchboxes, and paper matches are partially cut into rows and stapled into matchbooks. The coated end of a match, known as the match "head", contains either phosphorus or phosphorus sesquisulfide as the active ingredient and gelatin as a binder. There are two main types of matches: safety matches, which can be struck only against a specially prepared surface, and strike-anywhere matches, for which any suitably frictional surface can be used. Some match-like compositions, known as electric matches, are ignited electrically and do not make use of heat from friction.