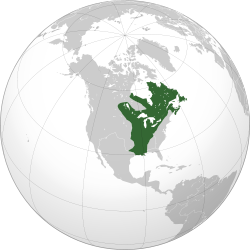 New France before the Treaty of Utrecht.

Louisiana (French: La Louisiane; by 1879, La Louisiane française{{#invoke:Category handler|main}}) or French Louisiana<ref name=LL/> was an administrative district of New France. Under French control 1682 to 1762 and 1802 (nominally) to 1803, the area was named in honor of King Louis XIV, by French explorer René-Robert Cavelier, Sieur de la Salle. It originally covered an expansive territory that included most of the drainage basin of the Mississippi River, and stretched from the Great Lakes to the Gulf of Mexico and from the Appalachian Mountains to the Rocky Mountains.

Louisiana was divided into two regions, known as Upper Louisiana (French: Haute-Louisiane), which began north of the Arkansas River, and Lower Louisiana (French: Basse-Louisiane). The U.S. state of Louisiana is named for the historical region, although it occupies only a small portion of the vast lands claimed by the French.<ref name="LL">La Louisiane française 1682-1803, 2002. Although named, "La Louisiane", that name became the French term for the U.S. state of Louisiana so, by 1879, the colonial region was called La Louisiane française.</ref>

Although French exploration of the area began during the reign of Louis XIV, French Louisiana was not greatly developed, due to a lack of human and financial resources. As a result of its defeat in the Seven Years' War, France was forced to cede the eastern part of the territory in 1763 to the victorious British, and the western part to Spain as compensation for that country's loss of Florida. France regained sovereignty of the western territory in the secret Treaty of San Ildefonso of 1800. But strained by obligations in Europe, Napoleon Bonaparte decided to sell the territory to the United States in the Louisiana Purchase of 1803, ending France's presence in Louisiana.

The United States ceded part of the Louisiana Purchase to the United Kingdom in the Treaty of 1818. This section lies above the 49th parallel north in a portion of present-day Alberta and Saskatchewan.