A Bishop celebrating the Divine Liturgy in an Eastern Catholic Church in Prešov, Slovakia. 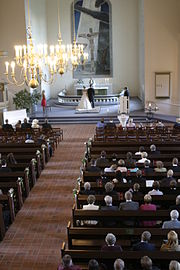 Liturgy (Greek: λειτουργία{{#invoke:Category handler|main}}) is the customary public worship done by a specific religious group, according to its particular beliefs, customs and traditions.

The word, sometimes rendered by its English translation "service", may refer to an elaborate formal ritual such as the Eastern Orthodox Divine Liturgy (Greek: Θεία Λειτουργία{{#invoke:Category handler|main}}), Catholic Mass, the Eucharist or Mass (Anglican Communion) or a daily activity such as the Muslim salat<ref>Oxford Dictionary of World Religions, p. 582–3</ref> and Jewish services. As a religious phenomenon, liturgy is a communal response to the sacred through activity reflecting praise, thanksgiving, supplication, or repentance. Ritualization may be associated with life events such as birth, coming of age, marriage and death. It thus forms the basis for establishing a relationship with a divine agency, as well as with other participants in the liturgy. Methods of dress, preparation of food, application of cosmetics or other hygienic practices are all considered liturgical activities.