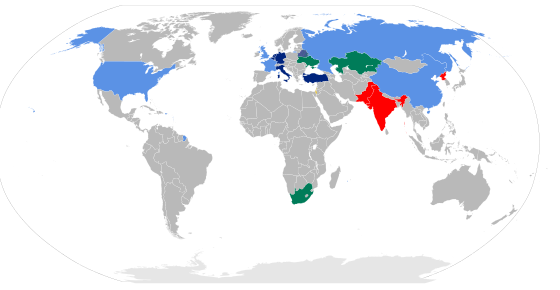 There are eight sovereign states that have successfully detonated nuclear weapons.<ref name="nuclearweapons1"/> Five are considered to be "nuclear-weapon states" (NWS) under the terms of the Treaty on the Non-Proliferation of Nuclear Weapons (NPT). In order of acquisition of nuclear weapons these are: the United States, Russia (successor state to the Soviet Union), the United Kingdom, France, and China.

Since the NPT entered into force in 1970, three states that were not parties to the Treaty have conducted nuclear tests, namely India, Pakistan, and North Korea. North Korea had been a party to the NPT but withdrew in 2003. Israel is also widely believed to have nuclear weapons, though it maintains a policy of deliberate ambiguity regarding this, and is not known definitively to have conducted a nuclear test.<ref>{{#invoke:citation/CS1|citation |CitationClass=news }}</ref> According to the Stockholm International Peace Research Institute's SIPRI Yearbook of 2014, Israel is estimated to have approximately 80 nuclear warheads.<ref name="sipri.org">Nuclear Forces, sipri.org</ref> Furthermore, according to Bulletin of the Atomic Scientists Nuclear Notebook 2014, the total number of nuclear weapons is estimated at 10,144.<ref>Nuclear Notebook, Bulletin of the Atomic Scientists, thebulletin.org, 2014</ref>