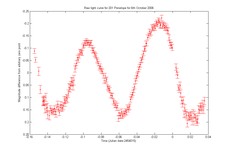 Light curve of the asteroid 201 Penelope based on images taken on 6 October 2006 at Mount John University Observatory. Shows just over one full rotation, which lasts 3.7474 hours.

In astronomy, a light curve is a graph of light intensity of a celestial object or region, as a function of time. The light is usually in a particular frequency interval or band. Light curves can be periodic, as in the case of eclipsing binaries, Cepheid variables, other periodic variables, and transiting extrasolar planets, or aperiodic, like the light curve of a nova, a cataclysmic variable star, a supernova or a microlensing event. The study of the light curve, together with other observations, can yield considerable information about the physical process that produces it or constrain the physical theories about it.<ref>S. V. H. Haugan Separating intrinsic and microlensing variability using parallax measurements (astro-ph/9508112. August 1995) [1]</ref> Light waves can also be used in botany to determine a plant's reactions to light intensities.