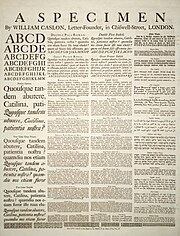 A Specimen of typeset fonts and languages, by William Caslon, letter founder; from the 1728 Cyclopaedia.

Ancient Greek letters on a vase

A letter is a grapheme (written character) in an alphabetic system of writing, such as the Greek alphabet and its descendants. Letters also appear in abjads and abugidas (variants of alphabets in which vowel marking is secondary or absent). Letters broadly denote phonemes in the spoken form of the language, although there is rarely a consistent exact correspondence between letters and phonemes.