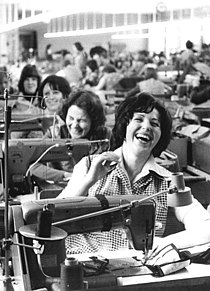 Workers laughing in a clothing factory.

Laughter is a physical reaction in humans and some other species of primate, consisting typically of rhythmical, often audible contractions of the diaphragm and other parts of the respiratory system. It is a response to certain external or internal stimuli. Laughter can arise from such activities as being tickled,<ref>{{#invoke:citation/CS1|citation |CitationClass=book }}</ref> or from humorous stories or thoughts.<ref>{{#invoke:Citation/CS1|citation |CitationClass=journal }}</ref> Most commonly, it is considered a visual expression of a number of positive emotional states, such as joy, mirth, happiness, relief, etc. On some occasions, however, it may be caused by contrary emotional states such as embarrassment, apology, or confusion such as nervous laughter or courtesy laugh. Age, gender, education, language, and culture are all factors<ref>{{#invoke:Citation/CS1|citation |CitationClass=journal }}</ref> as to whether a person will experience laughter in a given situation.

Laughter is a part of human behavior regulated by the brain, helping humans clarify their intentions in social interaction and providing an emotional context to conversations. Laughter is used as a signal for being part of a group — it signals acceptance and positive interactions with others. Laughter is sometimes seen as contagious, and the laughter of one person can itself provoke laughter from others as a positive feedback.<ref>Camazine, Deneubourg, Franks, Sneyd, Theraulaz, Bonabeau, Self-Organization in Biological Systems, Princeton University Press, 2003. ISBN 0-691-11624-5 --ISBN 0-691-01211-3 (pbk.) p. 18.</ref> This may account in part for the popularity of laugh tracks in situation comedy television shows.

The study of humor and laughter, and its psychological and physiological effects on the human body, is called gelotology. {{#invoke:Listen|main}}