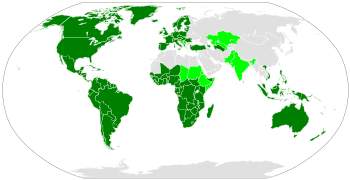 This map shows the countries in the world that use a Latin alphabet as the sole official (or de facto official) national script in dark green. The lighter green indicates the countries that use Latin as a co-official script at the national level.
The classical Latin alphabet, also known as the Roman alphabet, is a writing system that evolved from the visually similar Cumaean Greek version of the Greek alphabet. The Greek alphabet, including the Cumaean version, descended from the Phoenician abjad while The Phoenician alphabet is derived from Egyptian hieroglyphics.<ref>Michael C. Howard (2012), Transnationalism in Ancient and Medieval Societies. pp. 23.</ref> The Etruscans who ruled early Rome adopted and modified the Cumaean Greek alphabet. The Etruscan alphabet was in turn adopted and further modified by the ancient Romans to write the Latin language.

During the Middle Ages scribes adapted the Latin alphabet for writing Romance languages, direct descendants of Latin, as well as Celtic, Germanic, Baltic, and some Slavic languages. With the age of colonialism and Christian evangelism, the Latin script spread beyond Europe, coming into use for writing indigenous American, Australian, Austronesian, Austroasiatic, and African languages. More recently, linguists have also tended to prefer the Latin script or the International Phonetic Alphabet (itself largely based on Latin script) when transcribing or creating written standards for non-European languages, such as the African reference alphabet.

The term Latin alphabet may refer to either the alphabet used to write Latin (as described in this article), or other alphabets based on the Latin script, which is the basic set of letters common to the various alphabets descended from the classical Latin one, such as the English alphabet. These Latin alphabets may discard letters, like the Rotokas alphabet, or add new letters, like the Danish and Norwegian alphabets. Letter shapes have evolved over the centuries, including the creation for Medieval Latin of lower-case forms which did not exist in the Classical period alphabet.