Etymology and usage The word comes from Old English hlǣfdige; the first part of the word is a mutated form of hlāf, "loaf, bread", also seen in the corresponding hlāford, "lord". The second part is usually taken to be from the root dig-, "to knead", seen also in dough; the sense development from bread-kneader, or bread-maker, or bread-shaper, to the ordinary meaning, though not clearly to be traced historically, may be illustrated by that of "lord".

The primary meaning of "mistress of a household" is now mostly obsolete, save for the term landlady and in set phrases such as "the lady of the house." This meaning is retained in the southern states of the USA, and also, in the title First Lady for the wife of an elected official. In many European languages the equivalent term serves as a general form of address equivalent to the English Mrs (French Madame, Spanish Señora, Italian Signora, German Frau, Polish Pani, etc.). In those languages it is correct to address a woman whose name is unknown as Madame, Señora, etc., but in polite English usage "lady" has for centuries only normally been a "term of address" in the plural,<ref name="OED">Oxford English Dictionary</ref> which is also the case for "gentleman". The singular vocative use was once common but has become mostly confined to poetry.<ref name="OED"/> In some dialects it may still be used to address an unknown woman in a brusque manner, often in an imperative or interrogatory context, analogous to "mister" for an unknown male: e.g., "Hey, lady, you aren't allowed in here!"<ref>http://www.csmonitor.com/2007/0202/p18s02-hfes.html</ref> In this usage, the word "lady" is very seldom capitalized when written, nor is the construct "my lady" ever seen. The usual English term for politely addressing a woman is Madam or Ma'am.

The special use of the word as a title of the Virgin Mary, usually Our Lady, represents the Latin Domina Nostra. In Lady Day and Lady Chapel the word is properly a genitive, representing hlǣfdigan "of the Lady".

The word is also used as a title of the Wicca goddess, The Lady; Margaret Thatcher was informally referred to in the same way by many of her political colleagues when Prime Minister of Great Britain. 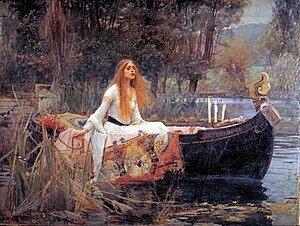 Especially in both Britain and Ireland, 'lady' is often, but not always, simply a courteous synonym for 'woman'. It has a formal and respectful quality, being used to describe a woman in old age such as 'an old lady' or when speaking about a woman to a child (e.g. "Give the money to the lady.") It may be used, however incongruously, in descriptions such as "the cleaning lady" or even "a bag lady" (tramp). Public lavatories are often distinguished by signs showing simply 'Ladies' or 'Gentlemen'.

However, formally "lady" is the female counterpart to higher ranks in society, from gentlemen, through knights, to lords, and so on. During the Middle Ages, princesses or daughters of the blood royal were usually known by their first names with "The Lady" prefixed, e.g. The Lady Elizabeth; since Old English and Middle English did not have a female equivalent to princes or earls or other royals or nobles, aside from the queen, women of royal and noble status simply carried the title of "Lady".

As a title of nobility, the uses of "lady" in Britain are parallel to those of "lord". It is thus a less formal alternative to the full title giving the specific rank, of marchioness, countess, viscountess or baroness, whether as the title of the husband's rank by right or courtesy, or as the lady's title in her own right. A peeress's title is used with the definite article: Lord Morris's wife is "The Lady Morris". A widow's title derived from her husband becomes the dowager, e.g. The Dowager Lady Smith. The title "Lady" is also used for a woman who is the wife of a Scottish feudal baron, the title "Lady" preceding the name of the barony.

In the case of younger sons of a duke or marquess, who by courtesy have "Lord" prefixed to their given and family name, the wife is known by the husband's given and family name with "The Lady" prefixed, e.g. The Lady John Smith. The daughters of dukes, marquesses and earls are by courtesy ladies; here that title is prefixed to the given and family name of the lady, e.g. The Lady Jane Smith, and this is preserved if the lady marries a commoner, e.g. Mr John and The Lady Jane Smith. The article 'The' should be used prior to "Lady" or "Lord" in all cases, except after a divorce for women who do not hold the courtesy title of "Lady" in their own right, e.g. or Jane, Lady Smith (the ex-wife of Lord John Smith).

"Lady" is also the customary title of the wife of a baronet or knight, but in this case with neither the article nor Christian name: "Lady" with the surname of the husband only, Sir John and Lady Smith. When a woman divorces a knight and he marries again, the new wife will be Lady Smith while the ex-wife becomes Jane, Lady Smith.

Female recipients of the Order of the Garter and Order of the Thistle also receive the prefix of Lady; here that title is prefixed to the given and family name of the lady, e.g. The Lady Marion Fraser LT, with the post nominal LG or LT respectively, and this is preserved if the lady marries.

In more recent years, use of the word lady is even more complicated. The American journalist William Allen White noted one of the difficulties in his 1946 autobiography. He relates that a woman who had paid a fine for prostitution came to his newspaper to protest, not that the fact of her conviction was reported, but that the newspaper had referred to her as a "woman" rather than a "lady". After the incident, White assured his readers, his papers referred to human females as "women", with the exception of police court characters, who were all "ladies".

White's anecdote touches on a phenomenon that others have remarked on as well. In the late 19th and early twentieth century, in a difference reflected in the British novelist Nancy Mitford's essay "U vs. non-U", lower class women strongly preferred to be called "ladies" while women from higher social backgrounds were content to be identified as "women". Alfred Ayer remarked in 1881 that upper middle class female store clerks were content to be "saleswomen", while lower class female store clerks, for whom their job represented a social advancement, insisted on being called "salesladies". These social class issues, while no longer as prominent in this century, have imbued the formal use of "lady" with something of irony (e.g.: "my cleaning lady", or "ladies of the night" for prostitutes). Commenting on the word in 1953, C.S. Lewis wrote that "the guard at Holloway said it was a ladies' prison!"

It remains in use, for example, as a counterpart to "gentleman", in the phrase "ladies and gentlemen", and is generally interchangeable (in a strictly informal sense) with "woman" (as in, "The lady at the store said I could return this item within thirty days."). However, some women, since the rise of second wave feminism, have objected to the term used in contexts such as the last example, arguing that the term sounds patronising and outdated when used in this way; a man in the same context would not necessarily be referred to as a "gentleman". One feminist writer, Robin Lakoff, in her book "Language and Woman's Place" (1975), notably raised the issue of the ways in which "lady" is not used as the counterpart of "gentleman". A sign in the gardens of Hunters Hotel reads "Ladies and Gentlemen will not pick the flowers; others must not."