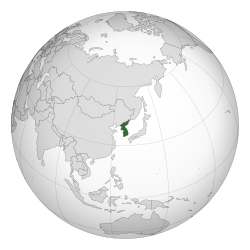 Territory of Joseon after Jurchen conquest of King Sejong

The Kingdom of Joseon (, literally "Great Joseon State"; also Chosŏn, Choson, Chosun) was a Korean kingdom founded by Yi Seonggye that lasted for approximately five centuries, from July 1392 to October 1897. It was officially renamed the Korean Empire in October 1897.<ref></ref> It was founded following the aftermath of the overthrow of Goryeo in what is today the city of Kaesong. Early on, Korea was retitled and the capital was relocated to modern-day Seoul. The kingdom's northernmost borders were expanded to the natural boundaries at the Yalu and Tumen Rivers through the subjugation of the Jurchens. Joseon was the last dynasty of Korea and its longest-ruling Confucian dynasty.

During its reign, Joseon encouraged the entrenchment of Chinese Confucian ideals and doctrines in Korean society. Neo-Confucianism was installed as the new dynasty's state ideology. Buddhism was accordingly discouraged and occasionally faced persecutions by the dynasty. Joseon consolidated its effective rule over the territory of current Korea and saw the height of classical Korean culture, trade, science, literature, and technology. However, the dynasty was severely weakened during the late 16th and early 17th centuries, when the Japanese invasions of Korea (1592–98) and the first and second Manchu invasions of 1636 nearly overran the Korean Peninsula, leading to an increasingly harsh isolationist policy for which the country became known as the "hermit kingdom". After the end of invasions from Manchuria, Joseon experienced a nearly 200-year period of peace.

However, whatever power the kingdom recovered during its isolation further waned as the 18th century came to a close, and faced with internal strife, power struggles, international pressure and rebellions at home, the Joseon dynasty declined rapidly in the late 19th century.

The Joseon period has left a substantial legacy to modern Korea; much of modern Korean etiquette, cultural norms, societal attitudes towards current issues, and the modern Korean language and its dialects derive from the culture and traditions of Joseon.