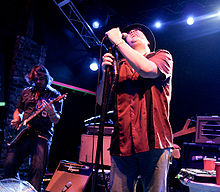 {{ safesubst:#invoke:Unsubst||$N=Use dmy dates |date=__DATE__ |$B= }} Jam bands are musical groups whose live albums and concerts relate to a unique fan culture that began in the 1960s with The Grateful Dead, and continued with The Allman Brothers Band, which had lengthy jams at concerts. The performances of these bands typically feature extended musical improvisation ("jams") over rhythmic grooves and chord patterns, and long sets of music that can often cross genre boundaries.<ref name="wiajb">{{#invoke:citation/CS1|citation |CitationClass=web }}</ref> The Grateful Dead continued to grow their fanbase in the second half of the 1980s. In the mid-1980s the bands Phish, Edie Brickell & New Bohemians, Blues Traveler, Ozric Tentacles, Widespread Panic, Bela Fleck and the Flecktones, Spin Doctors, Col Bruce Hampton and Aquarium Rescue Unit, began touring with Jam band-style concerts. In the early 1990s, a new generation of bands was spurred on by The Grateful Dead's touring and the increased exposure of The Black Crowes, Phish, Dave Matthews Band, Widespread Panic and Aquarium Rescue Unit.

Many of today's jam bands have brought widely varied genres into the scene. A jam band festival may include bands with electronic, folk rock, blues rock, jazz fusion, psychedelic rock, southern rock, progressive rock, acid jazz, hip hop, hard rock, and bluegrass sounds. The electronic trend has been led by such bands as The Disco Biscuits, Sound Tribe Sector 9 (STS9), Lotus, EOTO, The New Deal. Bands like moe., Umphrey's McGee, Assembly of Dust, The Heavy Pets and The Breakfast have carried on the classic rock sound mixed with exploratory jams. Members of The Grateful Dead have continued touring in many different configurations as The Dead, Bob Weir & Ratdog, Phil Lesh and Friends, 7 Walkers, and Furthur. The contemporary jam scene has grown to encompass bands from a great diversity of musical genres.

While the seminal group The Grateful Dead are categorized as psychedelic rock,<ref>The Grateful Dead Britannica Online, Retrieved 17 September 2007</ref> by the 1990s the term "jam band" was being used for groups playing a variety of rock-related genres, including blues, country music, folk music, and funk. Today the term even includes some groups completely outside of rock, such as those playing world music, electronic music, progressive bluegrass, and jazz fusion.<ref name="wiajb"/> By the late 1990s, the types of jam bands had grown so that the term became quite broad. By the late 1990s use of the term jam band also became ambiguous. Although in 2007 the term may have been used to describe nearly any cross-genre band, festival band, or improvisational band, the term retains an affinity to Grateful Dead-like bands such as Phish.<ref name="Relix, all issues">Relix, all issues.</ref> Some artists such as The Derek Trucks Band are known for resisting the jam band label.

A unique feature of the jam band scene is fan taping or digital recording of live concerts. While many other styles of music term fan taping as "illegal bootlegging", jam bands often allow their fans to make tapes or recordings of their live shows. Fans trade recordings and collect recordings of different live shows because improvisational jam bands play their songs differently at each performance. By the 2000s, as internet downloading of MP3 music files became common, downloading of jam band songs became an extension of the cassette taping trend. Archived jam band downloads are available at various websites, the most prominent ones being etree and the Live Music Archive, which is part of the Internet Archive. More bands have been distributing their latest shows online. Bands such as Phish, Widespread Panic, The String Cheese Incident, Gov't Mule, ekoostik hookah, Umphrey's McGee, Lotus, and The Disco Biscuits have been offering digital downloads within days, or sometimes hours, of concerts.