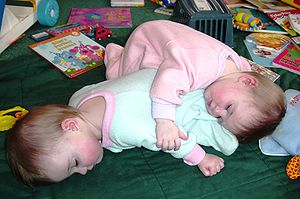 Eight months old infant; as a common feature eyes are usually larger compared to the face.

An infant (from the Latin word infans, meaning "unable to speak" or "speechless") is the very young offspring of a human or animal. When applied to humans, the term is usually considered synonymous with baby or bairn (in Scottish English), but the latter is commonly applied to the young of any animal. When a human child learns to walk, the term toddler may be used instead.

The term infant is typically applied to young children between the ages of 1 month and 12 months; however, definitions may vary between birth and 1 year of age, or even between birth and 2 years of age. A newborn is an infant who is only hours, days, or up to a few weeks old. In medical contexts, newborn or neonate (from Latin, neonatus, newborn) refers to an infant in the first 28 days after birth;<ref name="mwn">{{#invoke:citation/CS1|citation |CitationClass=web }}</ref> the term applies to premature infants, postmature infants, and full term infants. Before birth, the term fetus is used. In the UK, infant is a term that can be applied to school children aged between four and seven. As a legal terminology, "infancy" continues from birth until age 18.<ref name="infancy">{{#invoke:citation/CS1|citation |CitationClass=web }}</ref>