A Watt steam engine. The steam engine, made of iron and fueled primarily by coal, became widely used in the United Kingdom during the Industrial Revolution. 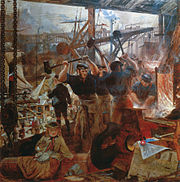 Iron and Coal, 1855–60, by William Bell Scott illustrates the rise of coal and iron working in the Industrial Revolution and the heavy engineering projects they made possible.

The Industrial Revolution was the transition to new manufacturing processes in the period from about 1760 to sometime between 1820 and 1840. This transition included going from hand production methods to machines, new chemical manufacturing and iron production processes, improved efficiency of water power, the increasing use of steam power, the development of machine tools and the rise of the factory system. It also included the change from wood and other bio-fuels to coal. Textiles were the dominant industry of the Industrial Revolution in terms of employment, value of output and capital invested; the textile industry was also the first to use modern production methods.<ref name="Landes1969">{{#invoke:Footnotes|harvard_citation_no_bracket}}</ref>:40

The Industrial Revolution marks a major turning point in history; almost every aspect of daily life was influenced in some way. In particular, average income and population began to exhibit unprecedented sustained growth. Some economists say that the major impact of the Industrial Revolution was that the standard of living for the general population began to increase consistently for the first time in history, although others have said that it did not begin to meaningfully improve until the late 19th and 20th centuries.<ref name="Lectures on Economic Growth"/><ref name="Feinstein2014"/><ref name="SzreterMooney2014"/>

The First Industrial Revolution evolved into the Second Industrial Revolution in the transition years between 1840 and 1870, when technological and economic progress continued with the increasing adoption of steam transport (steam-powered railways, boats and ships), the large-scale manufacture of machine tools and the increasing use of machinery in steam-powered factories.<ref name="Taylor 1951"> {{#invoke:citation/CS1|citation |CitationClass=book }} No name is given to the transition years. The Transportation Revolution began with improved roads in the late 18th century.</ref><ref name="Roe1916"/><ref>{{#invoke:Footnotes|harvard_citation_no_bracket}}</ref>