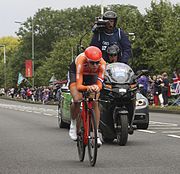 Bicycle construction is limited by regulations covering dimensions and other features such as weight. UCI Regulations At the professional level, time trials (TTs) are frequently accompanied by motorcycles, some carrying video equipment or race officials, and riders may be followed by a team car carrying coaches and spare parts, but the cyclists are not permitted to draft behind the vehicles. Race regulations typically dictate a minimum distance behind the cyclist which the car must maintain and a minimum gap that must exist between two cyclists before the car may enter that gap.

Individual time trials are often used as stages in stage races such as the Grand Tours; these vary from short prologue time trials over no more than eight kilometres,<ref>{{#invoke:citation/CS1|citation |CitationClass=citation }}</ref> to longer distance events over flat or rolling courses, to timed ascents of mountain roads (mountain time trial). In the 1989 edition of the Tour de France, eventual winner Greg LeMond made up a 50-second deficit to runner-up Laurent Fignon over 24.5 km during the individual time trial on the final stage to win the race by 8 seconds, the smallest margin ever. The Vuelta a España often features a final individual time trial in Madrid in which the winner is often decided, providing much drama and excitement at the end of the stage race. In recent years, Óscar Sevilla and Roberto Heras have seen their lead evaporate in the time trial in Madrid.

The Grand Prix des Nations was a semi-Classic event; professionals may also compete in the annual World time trial championship. The individual time trial is also an Olympic event in which professionals are allowed to participate.