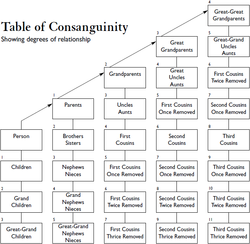 The number in each box indicates the degree of relationship

The incest taboo is and has been one of the most widespread of all cultural taboos, both in present and in many past societies.<ref name="Bittles"/> Most modern societies have laws regarding incest or social restrictions on closely consanguineous marriages.<ref name="Bittles"/> In societies where it is illegal, consensual adult incest is seen by some as a victimless crime.<ref name="spiegel">{{#invoke:citation/CS1|citation |CitationClass=web }}</ref><ref name= Wolf169>{{#invoke:citation/CS1|citation |CitationClass=book }}</ref> Some cultures extend the incest taboo to relatives with no consanguinity such as milk-siblings, step-siblings, and adoptive siblings.<ref>Encyclopedia of Love in World Religions - Volume 1 - Page 321, Yudit Kornberg Greenberg - 2008</ref><ref>Language and Social Relations - Page 379, Asif Agha - 2007.</ref> Third-degree relatives (such as half-aunt, half-nephew, first cousin) on average share 12.5% genes, and sexual relations between them is viewed differently in various cultures, from being discouraged to being socially acceptable.<ref>The Encyclopedia of Genetic Disorders and Birth Defects - Page 101, James Wynbrandt, Mark D. Ludman - 2009.</ref> The children of incestuous relationships were regarded as illegitimate, and are still so regarded in some societies today. In most cases, the parents did not have the option to marry to remove that status, as incestuous marriages were and are normally also prohibited.

A common justification given for the incest taboo is the impact inbreeding may have on children of incestuous sex. Children whose biological parents have a close genetic relationship have an increased risk of congenital disorders, death, and disability due at least in part to genetic diseases caused by the inbreeding.<ref name=WolfDurham2005>{{#invoke:citation/CS1|citation |CitationClass=book }}</ref> Unintended sexual relations between genetically related persons may also arise when either or both biological parents are unknown or uncertain, as in the case of children born as a result of casual or extramarital sexual relations, anonymous sperm donation, surrogacy, or adoption. On the other hand, most prohibitions on incest extend the categories of prohibited relationships to affinity relationships such as in-law relations, step relations, and relations through adoption, among others. As such, the incest taboo is not solely based on inbreeding, and also applies to sexual activity between relatives (genetically related or otherwise) who cannot have children or to sexual activity between relatives where conception is not likely to occur (for example, because of the use of contraception).

In some societies, such as those of Ancient Egypt and others, brother–sister, father–daughter, mother–son, cousin–cousin, aunt–nephew, uncle–niece, and other combinations of relations were practiced among royalty as a means of perpetuating the royal lineage.<ref>Maurice Godelier, Métamorphoses de la parenté, 2004</ref><ref>{{#invoke:citation/CS1|citation |CitationClass=web }}</ref> Some societies, such as the Balinese<ref name= Bateson>{{#invoke:citation/CS1|citation |CitationClass=book }}</ref> and some Inuit tribes,<ref name=JBriggs>{{#invoke:citation/CS1|citation |CitationClass=book }}</ref> have different views about what constitutes illegal and immoral incest. However, sexual relations with a first-degree relative (such as a parent or sibling) are almost universally forbidden.<ref>The Tapestry of Culture: An Introduction to Cultural Anthropology, Ninth Ed., Abraham Rosman, Paula G. Rubel, Maxine Weisgrau, 2009, AltaMira Press, p. 101</ref>