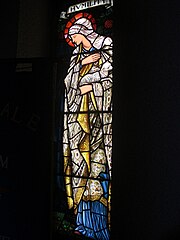 Representation of Humility in a stained-glass window, by Edward Burne-Jones.

Humility (adjectival form: humble) is variously seen as the act or posture of lowering oneself in relation to others, or conversely, having a clear perspective and respect for one's place in context. In a religious context this can mean a recognition of self in relation to a god or gods, acceptance of one's defects, and submission to divine grace as a member of a religion.<ref>Humility, The Catholic encyclopedia, Herbermann et al. (Editors), Vol 7, 1910, pp 543-544</ref><ref>Humility, The Protestant theological and ecclesiastical encyclopedia, Herzog et al (Editors), Vol 2, 1860, pp 598-599</ref> Outside of a religious context, humility is defined as the self-restraint from excessive vanity, and can possess moral and/or ethical dimensions.<ref name="gcc">{{#invoke:citation/CS1|citation |CitationClass=book }}</ref><ref name="Schwarzer 2012">{{#invoke:citation/CS1|citation |CitationClass=book }}</ref>

Humility, in various interpretations, is widely seen as a virtue in many religious and philosophical traditions, often in contrast to narcissism, hubris and other forms of pride.

Humility by definition can also be the quality or condition of being humble.