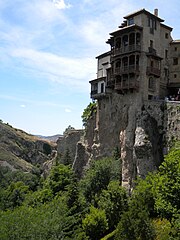 A ranch-style house in Salinas, California, US

House on the lands, where a German farmstead was once active.

A house is a building that functions as a home for humans<ref>American Shelter: An Illustrated Encyclopedia of the American Home By Les Walker. Overlook Press, July 1, 1998</ref> ranging from simple dwellings such as rudimentary huts of nomadic tribes and the improvised shacks in shantytowns to complex, fixed structures of wood, brick, or other materials containing plumbing, ventilation and electrical systems.<ref name=schoenauer>Schoenauer, Norbert (2000). 6,000 Years of Housing (rev. ed.) (New York: W.W. Norton & Company).</ref><ref>{{#invoke:citation/CS1|citation |CitationClass=web }}</ref> Most conventional modern houses in Western cultures will contain a bedroom, bathroom, kitchen or cooking area, and a living room. In traditional agriculture-oriented societies, domestic animals such as chickens or larger livestock (like cattle) may share part of the house with humans. The social unit that lives in a house is known as a household. Most commonly, a household is a family unit of some kind, although households may also be other social groups or individuals. The design and structure of the house is also subject to change as a consequence of globalization, urbanization and other social, economic, demographic, and technological reasons.<ref>Mughal, Muhammad Aurang Zeb (2015). Domestic Space and Socio-spatial Relationships in Rural Pakistan. South Asia Research 35(2):214-234.</ref> Various other cultural factors also influence the building style and patterns of domestic space.