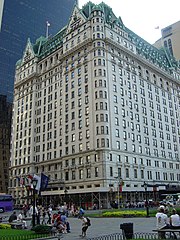 Lobby on 103rd floor at The Ritz-Carlton, Hong Kong

A hotel is an establishment that provides lodging paid on a short-term basis. Facilities provided may range from a basic bed and storage for clothing, to luxury features like en-suite bathrooms. Larger hotels may provide additional guest facilities such as a swimming pool, business center, childcare, conference facilities and social function services. Hotel rooms are usually numbered (or named in some smaller hotels and B&Bs) to allow guests to identify their room. Some hotels offer meals as part of a room and board arrangement. In the United Kingdom, a hotel is required by law to serve food and drinks to all guests within certain stated hours. In Japan, capsule hotels provide a minimized amount of room space and shared facilities.

The precursor to the modern hotel was the inn of medieval Europe. For a period of about 200 years from the mid-17th century, coaching inns served as a place for lodging for coach travelers. Inns began to cater for richer clients in the mid-18th century. One of the first hotels in a modern sense was opened in Exeter in 1768. Hotels proliferated throughout Western Europe and North America in the 19th century, and luxury hotels began to spring up in the later part of the century.

Timeshare and Destination clubs are a form of property ownership involving ownership of an individual unit of accommodation for seasonal usage. A motel is a small-sized low-rise lodging with direct access to individual rooms from the car park. Boutique hotels are typically hotels with a unique environment or intimate setting. A number of hotels have entered the public consciousness through popular culture, such as the Ritz Hotel in London. Some hotels are built specifically as a destination in itself, for example at casinos and holiday resorts.

Most hotel establishments consist of a General Manager who serves as the head executive (often referred to as the "Hotel Manager"), department heads who oversee various departments within a hotel, middle managers, administrative staff, and line-level supervisors. The organizational chart and volume of job positions and hierarchy varies by hotel size, function, and is often determined by hotel ownership and managing companies.