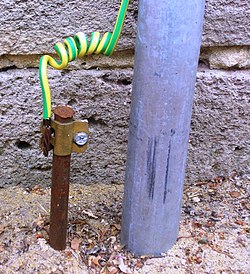 A typical earthing electrode (left of gray pipe), consisting of a conductive rod driven into the ground, at a home in Australia.

Most electrical codes specify that the insulation on protective earthing conductors must be a distinctive color (or color combination) not used for any other purpose.

In electrical engineering, ground or earth is the reference point in an electrical circuit from which voltages are measured, a common return path for electric current, or a direct physical connection to the Earth.

Electrical circuits may be connected to ground (earth) for several reasons. In mains powered equipment, exposed metal parts are connected to ground to prevent user contact with dangerous voltage if electrical insulation fails. Connections to ground limit the build-up of static electricity when handling flammable products or electrostatic-sensitive devices. In some telegraph and power transmission circuits, the earth itself can be used as one conductor of the circuit, saving the cost of installing a separate return conductor (see single-wire earth return).

For measurement purposes, the Earth serves as a (reasonably) constant potential reference against which other potentials can be measured. An electrical ground system should have an appropriate current-carrying capability to serve as an adequate zero-voltage reference level. In electronic circuit theory, a "ground" is usually idealized as an infinite source or sink for charge, which can absorb an unlimited amount of current without changing its potential. Where a real ground connection has a significant resistance, the approximation of zero potential is no longer valid. Stray voltages or earth potential rise effects will occur, which may create noise in signals or if large enough will produce an electric shock hazard.

The use of the term ground (or earth) is so common in electrical and electronics applications that circuits in portable electronic devices such as cell phones and media players as well as circuits in vehicles may be spoken of as having a "ground" connection without any actual connection to the Earth, despite "common" being a more appropriate term for such a connection. This is usually a large conductor attached to one side of the power supply (such as the "ground plane" on a printed circuit board) which serves as the common return path for current from many different components in the circuit.