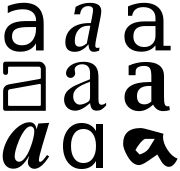 In typography, a glyph {{#invoke:IPAc-en|main}} is an elemental symbol within an agreed set of symbols, intended to represent a readable character for the purposes of writing and thereby expressing thoughts, ideas and concepts. As such, glyphs are considered to be unique marks that collectively add up to the spelling of a word, or otherwise contribute to a specific meaning of what is written, with that meaning dependent on cultural and social usage.

For example, in most languages written in any variety of the Latin alphabet the dot on a lower-case i is not a glyph because it does not convey any distinction, and an i in which the dot has been accidentally omitted is still likely to be recognized correctly. In Turkish, however, it is a glyph because that language has two distinct versions of the letter i, with and without a dot.

In general, a diacritic is a glyph, even if (like a cedilla in French, the ogonek in several languages or the stroke on a Polish "Ł") it is "joined up" with the rest of the character.

Some characters, such as "æ" in Icelandic and the "ß" in German, would probably be regarded as glyphs: they were originally ligatures but over time have become characters in their own right, and these languages treat them as separate letters. However, a ligature such as "ſi", which is treated in some typefaces as a single unit, is arguably not a glyph as this is just a quirk of the typeface, essentially an allographic feature, and includes more than one grapheme. In normal handwriting, even long words are often written "joined up", without the pen leaving the paper, and the form of each written letter will often vary depending on which letters precede and follow it, but that does not make the whole word into a single glyph.

Two or more glyphs which have the same significance, whether used interchangeably or chosen depending on context, are called allographs of each other.