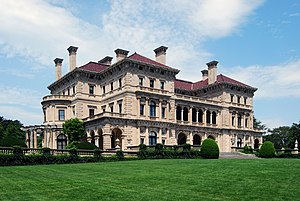 "The Breakers," a Gilded Age mansion in Newport, Rhode Island

The Gilded Age in United States history is the late 19th century, from the 1870s to about 1900. The term was coined by writer Mark Twain in The Gilded Age: A Tale of Today (1873), which satirized an era of serious social problems masked by a thin gold gilding.

The Gilded Age was an era of rapid economic growth, especially in the North and West. As American wages were much higher than those in Europe, especially for skilled workers, the period saw an influx of millions of European immigrants. The rapid expansion of industrialization led to real wage growth of 60% between 1860 and 1890, despite the ever-increasing labor force.<ref>{{#invoke:citation/CS1|citation |CitationClass=book }}</ref><ref>The Census Bureau reported in 1892 that the average annual wage per industrial worker (including men, women and children) rose from $380 in 1880 to $564 in 1890, a gain of 48%. {{#invoke:citation/CS1|citation |CitationClass=book }}</ref> However, the Gilded Age was also an era of abject poverty and inequality as millions of immigrants—many from impoverished European nations—poured into the United States, and wealth became highly concentrated.<ref>{{#invoke:citation/CS1|citation |CitationClass=book }}</ref> Railroads were the major industry, but the factory system, mining, and finance increased in importance. Immigration from Europe, China and the eastern states led to the rapid growth of the West, based on farming, ranching and mining. Labor unions became important in industrial areas. Two major nationwide depressions—the Panic of 1873 and the Panic of 1893—interrupted growth and caused social and political upheavals. The South after the American Civil War remained economically devastated; its economy became increasingly tied to cotton and tobacco production, which suffered from low prices. Black people in the South were stripped of political power, voting rights, and left economically disadvantaged.

The political landscape was notable in that despite some corruption, turnout was very high and elections between the evenly matched parties were close. The dominant issues were cultural (especially regarding prohibition, education and ethnic racial groups), and economic (tariffs and money supply). With the rapid growth of cities, political machines increasingly took control of urban politics. Unions crusaded for the 8-hour working day and the abolition of child labor; middle class reformers demanded civil service reform, prohibition, and women's suffrage. Local governments built schools and hospitals, while private schools and hospitals were founded by local philanthropists. Numerous religious denominations were growing in membership and wealth; they expanded their missionary activity to the world arena. Catholics and Lutherans set up parochial schools and the larger denominations set up many colleges and hospitals.