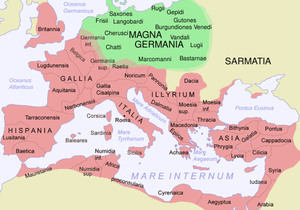 Some Germani, perhaps the original people to have been referred to by this name, had lived on the west side of the Rhine. At least as early as the 2nd century BC this area was considered{{ safesubst:#invoke:Unsubst||$N=By whom |date=__DATE__ |$B= {{#invoke:Category handler|main}}[by whom?] }} to be in "Gaul", and became part of the Roman empire in the course of the Gallic Wars (58-50 BC). These so-called Germani cisrhenani lived in the region of present-day eastern Belgium, the southeastern Netherlands, and stretching into Germany towards the Rhine. During the period of the Roman empire, more tribes settled in areas of the empire near the Rhine, in territories controlled by the Roman Empire. Eventually these areas came to be known as Lesser Germania, while Greater Germania (Magna Germania{{#invoke:Category handler|main}}; it is also referred to by names referring to its being outside Roman control: Germania libera{{#invoke:Category handler|main}}, "free Germania") formed the larger territory east of the Rhine.