Gaelic football (Irish: Peil Ghaelach; short name Peil<ref name="google">{{#invoke:citation/CS1|citation |CitationClass=book }}</ref> or Caid), commonly referred to as football or Gaelic,<ref>The sport is also sometimes referred to in Dublin as "Gah": see {{#invoke:citation/CS1|citation |CitationClass=news }}; {{#invoke:citation/CS1|citation |CitationClass=web }}</ref> is an Irish team sport. It is a form of football derived from traditional Irish ball games. It is played between two teams of 15 players on a rectangular grass pitch. The objective of the sport is to score by passing the ball through the other team's goals (3 points) or a set of two upright posts separated by a crossbar {{safesubst:#invoke:convert|convert}} above the ground (1 point).

Players advance the football, a spherical leather ball, up the field with a combination of carrying, bouncing, kicking, hand-passing, and soloing (dropping the ball and then toe-kicking the ball upward into the hands). In the game, two types of scores are possible: points and goals. A point is awarded for kicking or hand-passing the ball over the crossbar, signalled by the umpire raising a white flag. A goal is awarded for kicking the ball under the crossbar into the net, signalled by the umpire raising a green flag. Positions in Gaelic football are similar to that in other football codes, and comprise one goalkeeper, six backs, two midfielders, and six forwards, with a variable number of substitutes. 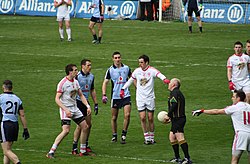 A league game between Dublin and Tyrone

Gaelic football was first codified in 1887, although it has links to older varieties of football played in Ireland and known collectively as caid. Consequently, the name caid is used by some people to refer to present day Gaelic football.

The first legal reference of football in Ireland was in 1308, when John McCrocan, a spectator at a football game at Novum Castrum de Leuan (the New Castle of the Lyons or Newcastle) was charged with accidentally stabbing a player named William Bernard. A field near Newscastle, Co. Dublin is still known as the football field.<ref>"Irish Gaelic Football". Accessed 19 September 2011.</ref><ref>{{#invoke:citation/CS1|citation |CitationClass=book }}</ref><ref>{{#invoke:citation/CS1|citation |CitationClass=book }}</ref><ref>{{#invoke:citation/CS1|citation |CitationClass=book }}</ref> The Statute of Galway of 1527 allowed the playing of "foot balle" and archery but banned "'hokie' — the hurling of a little ball with sticks or staves" as well as other sports.

The earliest record of a recognised precursor to the modern game date from a match in County Meath in 1670, in which catching and kicking the ball was permitted.<ref name="thesmartjournal1">The History of Gaelic Football and the Gaelic Athletic Association</ref>

However even "foot-ball" was banned{{ safesubst:#invoke:Unsubst||date=__DATE__ |$B= {{#invoke:Category handler|main}}{{#invoke:Category handler|main}}[citation needed] }} by the severe Sunday Observance Act of 1695, which imposed a fine of one shilling (a substantial amount at the time) for those caught playing sports. It proved difficult, if not impossible, for the authorities to enforce the Act and the earliest recorded inter-county match in Ireland was one between Louth and Meath, at Slane, in 1712, about which the poet James Dall McCuairt wrote a poem of 88 verses beginning "Ba haigeanta".

A six-a-side version was played in Dublin in the early 18th century, and 100 years later there were accounts of games played between County sides (Prior, 1997).

By the early 19th century, various football games, referred to collectively as caid, were popular in Kerry, especially the Dingle Peninsula. Father W. Ferris described two forms of caid: the "field game" in which the object was to put the ball through arch-like goals, formed from the boughs of two trees, and; the epic "cross-country game", which lasted the whole of a Sunday (after mass) and was won by taking the ball across a parish boundary. "Wrestling", "holding" opposing players, and carrying the ball were all allowed.

During the 1860s and 1870s, Rugby football started to become popular in Ireland. Trinity College, Dublin was an early stronghold of Rugby, and the rules of the (English) Football Association were codified in 1863 and distributed widely. By this time, according to Gaelic football historian Jack Mahon, even in the Irish countryside, caid had begun to give way to a "rough-and-tumble game", which even allowed tripping. Association football started to take hold, especially in Ulster, in the 1880s.

Limerick was the stronghold of the native game around this time, and the Commercials Club, founded by employees of Cannock's Drapery Store, was one of the first to impose a set of rules, which was adapted by other clubs in the city. Of all the Irish pastimes the GAA set out to preserve and promote, it is fair to say that Gaelic football was in the worst shape at the time of the association's foundation (GAA Museum, 2001).<ref name="thesmartjournal1"/>

Irish forms of football were not formally arranged into an organised playing code by the Gaelic Athletic Association (GAA) until 1887. The GAA sought to promote traditional Irish sports, such as hurling and to reject "foreign" (particularly English) imports. The first Gaelic football rules, showing the influence of hurling and a desire to differentiate from association football – for example in their lack of an offside rule — were drawn up by Maurice Davin and published in the United Ireland magazine on 7 February 1887. The rules of the aforementioned Commercials Club became the basis for these official (Gaelic Football) rules who, unsurprisingly, won the inaugural All-Ireland Senior Football Final (representing County Limerick)<ref>{{#invoke:citation/CS1|citation |CitationClass=web }}</ref>

On Bloody Sunday in 1920, during the Anglo-Irish War, a football match at Croke Park was attacked by British forces. 14 people were killed and 65 were injured. Among the dead was Tipperary footballer Michael Hogan, for whom the Hogan Stand at Croke Park (completed in 1924) was named.

The relationship between Gaelic football and Australian rules football and the question of whether they have shared origins is a matter of historical controversy. Games are held between an Irish representative team and an Australian team, under compromise rules known as international rules football.