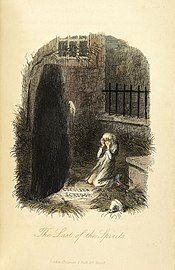 The Ghost of Christmas Yet to Come shows Scrooge his future in Dickens' A Christmas Carol.

The future is what will happen in the time after the present. Its arrival is considered inevitable due to the existence of time and the laws of physics. Due to the apparent nature of reality and the unavoidability of the future, everything that currently exists and will exist can be categorized as either permanent, meaning that it will exist forever, or temporary, meaning that it will end. The future and the concept of eternity have been major subjects of philosophy, religion, and science, and defining them non-controversially has consistently eluded the greatest of minds.<ref>Hastings, J., Selbie, J. A., & Gray, L. H. (1908). Encyclopædia of religion and ethics. Edinburgh: T. & T. Clark. Page 335–337.</ref> In the Occidental view, which uses a linear conception of time, the future is the portion of the projected time line that is anticipated to occur.<ref>Moore, C.-L., & Yamamoto, K. (1988). Beyond words: movement observation and analysis. New York: Gordon and Breach. Page 57. (cf., The representation of time as a linear, unidirectional progression is a distinctly Occidental point of view.)</ref> In special relativity, the future is considered absolute future, or the future light cone.<ref>Eddington, A. S. (1921). Space, time and gravitation; an outline of the general relativity theory. Cambridge: University Press. Page 107.</ref>

In the philosophy of time, presentism is the belief that only the present exists and the future and the past are unreal. Religions consider the future when they address issues such as karma, life after death, and eschatologies that study what the end of time and the end of the world will be. Religious figures such as prophets and diviners have claimed to see into the future. Organized efforts to predict or forecast the future may have derived from observations by early man of heavenly objects.

Future studies, or futurology, is the science, art and practice of postulating possible futures. Modern practitioners stress the importance of alternative and plural futures, rather than one monolithic future, and the limitations of prediction and probability, versus the creation of possible and preferable futures.

The future has been explored through several art movements and cultural genres. The futurism art movement at the beginning of the 20th century explored every medium of art, including painting, sculpture, poetry, theatre, music, architecture and even gastronomy. Futurists had passionate loathing of ideas from the past, especially political and artistic traditions. Instead, they espoused a love of speed, technology, and violence.<ref>Umbro Apollonio (ed.), Futurist Manifestos, MFA Publications, 2001 ISBN 978-0-87846-627-6</ref><ref name="futurmanifest">{{#invoke:citation/CS1|citation |CitationClass=web }}</ref> Futuristic music involved homage to, inclusion of, or imitation of machines. Futurism expanded to encompass other artistic domains and ultimately included industrial design, textiles, and architecture.