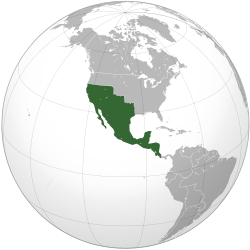 The territory of the Mexican Empire corresponded to the old Viceroyalty of New Spain, excluding the Captaincies General of Cuba, Santo Domingo and the Philippines. The lands of the former Captaincy General of Guatemala were annexed to the Empire shortly after its establishment. The first and only monarch of the state was Agustín de Iturbide, reigning as Agustín I of Mexico.<ref>{{#invoke:citation/CS1|citation |CitationClass=web }}</ref>