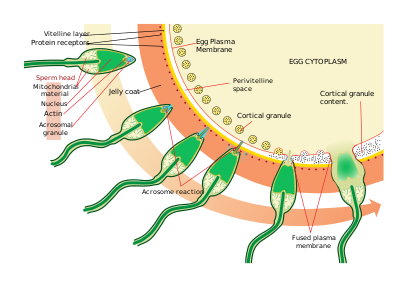 Sperm find the eggs via chemotaxis, a type of ligand/receptor interaction. Resact is a 14 amino acid peptide purified from the jelly coat of A. punctulata that attracts the migration of sperm.

Fusion of the plasma membranes of the sperm and egg are likely mediated by bindin. At the site of contact, fusion causes the formation of a fertilisation cone.

Mammals internally fertilise through copulation. After a male ejaculates, many sperm move to the upper vagina (via contractions from the vagina) through the cervix and across the length of the uterus to meet the ovum. In cases where fertilisation occurs, the female usually ovulates during a period that extends from hours before copulation to a few days after; therefore, in most mammals it is more common for ejaculation to precede ovulation than vice versa.

The capacitated spermatozoon and the oocyte meet and interact in the ampulla of the fallopian tube. Thermotactic and chemotactic gradients are involved in guiding sperm towards the egg during the final stage of sperm migration. Spermatozoa respond (see Thermotaxis) to the temperature gradient of ~2 °C between the oviduct and the ampulla,<ref>{{#invoke:Citation/CS1|citation |CitationClass=journal }}</ref> and chemotactic gradients of progesterone have been confirmed as the signal emanating from the cumulus oophorus cells surrounding rabbit and human oocytes.<ref>{{#invoke:Citation/CS1|citation |CitationClass=journal }}</ref> Capacitated and hyperactivated sperm respond to these gradients by changing their behaviour and moving towards the cumulus-oocyte complex. Other chemotactic signals such as formyl Met-Leu-Phe (fMLF) may also guide spermatozoa.<ref name=Gnessi1986>{{#invoke:Citation/CS1|citation |CitationClass=journal }}</ref>

The zona pellucida, a thick layer of extracellular matrix that surrounds the egg and is similar to the role of the vitelline membrane in sea urchins, binds with the sperm. Unlike sea urchins, the sperm binds to the egg before the acrosomal reaction. ZP3, a glycoprotein in the zona pellucida, is responsible for egg/sperm adhesion in mice. The receptor galactosyltransferase (GalT) binds to the N-acetylglucosamine residues on the ZP3 and is important for binding with the sperm and activating the acrosome reaction. ZP3 is sufficient though unnecessary for sperm/egg binding. Two additional sperm receptors exist: a 250kD protein that binds to an oviduct secreted protein, and SED1, which independently binds to the zona. After the acrosome reaction, the sperm is believed to remain bound to the zona pellucida through exposed ZP2 receptors. These receptors are unknown in mice but have been identified in guinea pigs.

In mammals, the binding of the spermatozoon to the GalT initiates the acrosome reaction. This process releases the hyaluronidase that digests the matrix of hyaluronic acid in the vestments around the oocyte. Fusion between the oocyte plasma membranes and sperm follows and allows the sperm nucleus, centriole and flagellum, but not the mitochondria, to enter the oocyte. The protein CD9 likely mediates this fusion in mice (the binding homolog). The egg "activates" itself upon fusing with a single sperm cell and thereby changes its cell membrane to prevent fusion with other sperm. {{#invoke:Side box|main}} This process ultimately leads to the formation of a diploid cell called a zygote. The zygote divides to form a blastocyst and, upon entering the uterus, implants in the endometrium, beginning pregnancy. Embryonic implantation not in the uterine wall results in an ectopic pregnancy that can kill the mother.

In such animals as rabbits, coitus induces ovulation by stimulating the release of the pituitary hormone gonadotropin; this release greatly increases the likelihood of pregnancy.

The term conception commonly refers to fertilisation, which is the successful fusion of gametes to form a new organism. Its use 'conception' by some to refer to implantation makes it a subject of semantic arguments about the beginning of pregnancy, typically in the context of the abortion debate. Upon gastrulation, which occurs around 16 days after fertilisation, the implanted blastocyst develops three germ layers, the endoderm, the ectoderm and the mesoderm, and the genetic code of the father becomes fully involved in the development of the embryo; later twinning is impossible. Additionally, interspecies hybrids survive only until gastrulation and cannot further develop. However, some human developmental biology literature refers to the conceptus and such medical literature refers to the "products of conception" as the post-implantation embryo and its surrounding membranes.<ref>{{#invoke:citation/CS1|citation |CitationClass=book }}</ref> The term "conception" is not usually used in scientific literature because of its variable definition and connotation.

Red-veined darters (Sympetrum fonscolombii) flying "in cop" (male ahead), enabling the male to prevent other males from mating. The eggs are fertilised as they are laid, one at a time.

Insects in different groups, including the Odonata (dragonflies and damselflies) and the Hymenoptera (ants, bees, and wasps) practise delayed fertilisation. Anong the Odonata, females may mate with multiple males, and store sperm until the eggs are laid. The male may hover above the female during egg-laying (oviposition) to prevent her from mating with other males and replacing his sperm; in some groups such as the darters, the male continues to grasp the female with his claspers during egg-laying, the pair flying around in tandem.<ref>{{#invoke:citation/CS1|citation |CitationClass=book }}</ref> Among social Hymenoptera, honeybee queens mate only on mating flights, in a short period lasting some days; a queen may mate with eight or more drones. She then stores the sperm for the rest of her life, perhaps for five years or more.<ref>{{#invoke:citation/CS1|citation |CitationClass=book }}</ref><ref>{{#invoke:citation/CS1|citation |CitationClass=web }}</ref>