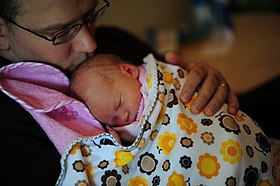 Paternal bonding between a father and his newborn daughter

A father is the male parent of a (human) child. A biological father is the male genetic contributor to the creation of the baby, through sexual intercourse or sperm donation. An adoptive father is a male who has become the child's parent through the legal process of adoption. As a parent, the father has a social and legal relationship with the child that carries with it certain rights and obligations, although this varies between jurisdictions. A biological father may have legal obligations to a child not raised by him, such as an obligation of monetary support. A putative father is a man whose biological relationship to a child is alleged but has not been established.

The adjective "paternal" refers to a father and comparatively to "maternal" for a mother. The verb "to father" means to procreate or to sire a child from which also derives the noun "fathering". Biological fathers determine the sex of their child through a sperm cell which either contains an X chromosome (female), or Y chromosome (male).<ref>HUMAN GENETICS, MENDELIAN INHERITANCE retrieved 25 February 2012</ref> Related terms of endearment are dad (dada, daddy), papa/pappa , papasita, (pa, pap) and pop. A male role-model that children can look up to is sometimes referred to as a father-figure.