An 18th-century Dutch engraving of the peoples of the world, depicting the inhabitants of Asia, the Americas and Africa as savages. Shown below are an Englishman, a Dutchman, a German and a Frenchman. 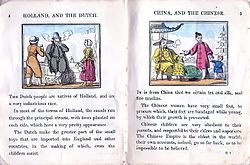 A 19th-century children's book informs its readers that the Dutch are a very industrious race, and that Chinese children are very obedient to their parents.

An ethnic stereotype, national stereotype, or national character is a system of beliefs about typical characteristics of members of a given ethnic group or nationality, their status, society and cultural norms. National stereotypes may be either about their own ethnicity/nationality or about others. Stereotypes about their own nation may aid in maintaining a national identity.<ref>{{#invoke:Citation/CS1|citation |CitationClass=journal }}</ref>

Ethnic stereotypes are commonly portrayed in ethnic jokes, most of which are usually considered to be offensive in various degrees. Richard M. Steers and Luciara Nardon in their book about global economy use the "You have two cows" joke to illustrate the concept of cultural differences. They write that jokes of this kind:<ref>Managing In The Global Economy, by Richard M. Steers, Luciara Nardon (2005) ISBN 0-7656-1551-7</ref>

– are considered funny because they are realistic caricatures of various cultures, and the pervasiveness of such jokes stems from the significant cultural differences. Steers and Nardon also state that others believe that cultural stereotypes in jokes of this kind must be viewed with caution.