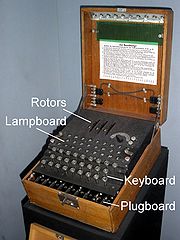 An Enigma machine was a series of electro-mechanical rotor cipher machines developed and used in the early to mid twentieth century for commercial and military usage. Enigma was invented by the German engineer Arthur Scherbius at the end of World War I.<ref name="Singh2011">{{#invoke:citation/CS1|citation |CitationClass=book }}</ref> Early models were used commercially from the early 1920s, and adopted by military and government services of several countries, most notably Nazi Germany before and during World War II.<ref>{{#invoke:citation/CS1|citation |CitationClass=web }}</ref> Several different Enigma models were produced, but the German military models are the most commonly recognised.

On 25 July 1939, in Warsaw, the Poles initiated French and British military intelligence representatives into their Enigma-decryption techniques and equipment, including Zygalski sheets and the cryptologic bomb, and promised each delegation a Polish-reconstructed Enigma. The demonstration represented a vital basis for the later British continuation and effort.<ref>Gordon Welchman, who became head of Hut 6 at Bletchley Park, has written: "Hut 6 Ultra would never have gotten off the ground if we had not learned from the Poles, in the nick of time, the details both of the German military version of the commercial Enigma machine, and of the operating procedures that were in use." Gordon Welchman, The Hut Six Story, 1982, p. 289.</ref> During the war, British cryptologists decrypted a vast number of messages enciphered on Enigma. The intelligence gleaned from this source, codenamed "Ultra" by the British, was a substantial aid to the Allied war effort.<ref>Much of the German cipher traffic was encrypted on the Enigma machine, and the term "Ultra" has often been used almost synonymously with "Enigma decrypts". Ultra also encompassed decrypts of the German Lorenz SZ 40 and 42 machines that were used by the German High Command, and decrypts of Hagelin ciphers and other Italian ciphers and codes, as well as of Japanese ciphers and codes such as Purple and JN-25.</ref>