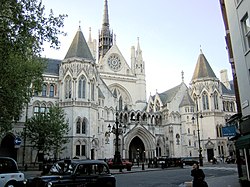 The Royal Courts of Justice on the Strand in London is the seat of the High Court of Justice and the Court of Appeal.

English law means the legal system of England and Wales.<ref>Jurisdiction Of Courts In England And Wales And Their Recognition Of Foreign Insolvency Proceedings. Insolvency.gov.uk. Retrieved on 2013-02-03.</ref>

The essence of English common law is that it is made by judges sitting in courts, applying legal precedent (stare decisis) to the facts before them. A decision of the Supreme Court of the United Kingdom, the highest civil appeal court of the United Kingdom, is binding on every other court. For example, murder is a common law crime rather than one established by an Act of Parliament. Common law can be amended or repealed by Parliament; murder, for example, now carries a mandatory life sentence rather than the death penalty.