Earthquake engineering or engineering seismology is an interdisciplinary branch of engineering that searches for ways to make structures, such as buildings and bridges, resistant to earthquake damage. Earthquake engineer, better known as a seismic engineer aim to develop building techniques that will prevent any damage in a minor quake and avoid serious damage or collapse in a major shake. It is the scientific field concerned with protecting society, the natural environment, and the man-made environment from earthquakes by limiting the seismic risk to socio-economically acceptable levels.<ref name=Bozorgnia2004>{{#invoke:citation/CS1|citation |CitationClass=book }}</ref> Traditionally, it has been narrowly defined as the study of the behavior of structures and geo-structures subject to seismic loading; it is considered as a subset of structural engineering, geotechnical engineering, mechanical engineering, chemical engineering, applied physics, etc. However, the tremendous costs experienced in recent earthquakes have led to an expansion of its scope to encompass disciplines from the wider field of civil engineering, mechanical engineering and from the social sciences, especially sociology, political science, economics and finance.

The main objectives of earthquake engineering are:

A properly engineered structure does not necessarily have to be extremely strong or expensive. It has to be properly designed to withstand the seismic effects while sustaining an acceptable level of damage. 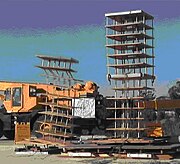