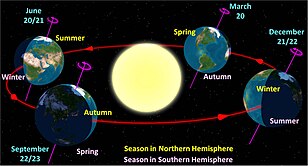 The Earth in different points in its orbit.

Earth's orbit is the path in which the Earth travels around the Sun. Earth lies at an average distance of 149.60 million kilometers (92.957 million miles) from the Sun<ref>{{#invoke:citation/CS1|citation |CitationClass=web }}</ref> and a complete orbit occurs every {{#invoke:Gaps|main}} days (1 sidereal year), during which time Earth travels 940 million kilometers (584 million miles).<ref name="AA">Jean Meeus, Astronomical Algorithms (Richmond, VA: Willmann-Bell, 1998) 238. The formula by Ramanujan is accurate enough.</ref> Earth's orbit has an eccentricity of 0.0167. Earth's orbital motion gives an apparent movement of the Sun with respect to other stars at a rate of about 1° per day (or a Sun or Moon diameter every 12 hours) eastward as seen from Earth.<ref group=nb>Our planet takes about 365 days to orbit the Sun. A full orbit has 360 degrees. That demonstrates that each day, the Earth travels roughly 1 degree in its orbit. As a consequence, the Sun will appear to move across the sky relative to the stars by that same amount.</ref> Earth's orbital speed averages about 30 km/s (67,000 mph), which is fast enough to cover the planet's diameter in seven minutes and the distance to the Moon in four hours.<ref name="earth_fact_sheet">{{#invoke:citation/CS1|citation |CitationClass=web }}</ref>