This list is incomplete; you can help by expanding it. 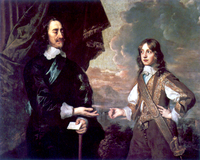 Charles I of England and his son, the future James II

A dynasty ({{#invoke:IPAc-en|main}}, {{#invoke:IPAc-en|main}}) is a sequence of rulers from the same family,<ref name=OED>Oxford English Dictionary, 1st ed. "dynasty, n." Oxford University Press (Oxford), 1897.</ref> usually in the context of a feudal or monarchical system but sometimes also appearing in elective republics. The dynastic family or lineage may be known as a "house";<ref name=OED2>Oxford English Dictionary, 3rd ed. "house, n.¹ and int, 10. b." Oxford University Press (Oxford), 2011.</ref> this may be styled "royal", "princely", "comital", etc. depending upon the chief or present title borne by its members. Historians consider many sovereign states' histories, such as Ancient Egypt, the Carolingian Empire and Imperial China, within a framework of successive dynasties. As such, the term "dynasty" may be used to delimit the era during which the family reigned and to describe events, trends, and artifacts of that period ("a Ming-dynasty vase"). The word "dynasty" itself is often dropped from such adjectival references ("a Ming vase").

Until the 19th century, it was taken for granted that a legitimate function of a monarch was to aggrandize his dynasty: that is, to increase the territory, wealth, and power of his family members.<ref>{{#invoke:citation/CS1|citation |CitationClass=book }}</ref> The longest-surviving dynasty in the world is the Imperial House of Japan, the Yamato dynasty, whose reign is traditionally dated to 660 BC.

Dynasties throughout the world have traditionally been reckoned patrilineally, such as under the Frankish Salic law. Succession through a daughter when permitted was considered to establish a new dynasty in her husband's ruling house. However, some states in Africa (Balobedu), determined descent matrilineally, while rulers have at other times adopted the name of their mother's dynasty when coming into her inheritance: examples include the Dutch House of Orange, the Georgian Bagrationi, and Habsburg-Lorraine.

The word "dynasty" is sometimes used informally for people who are not rulers but, for example, members of a family with influence and power in other areas, such as a series of successive owners of a major company. It is also extended to unrelated people such as major poets of the same school or various rosters of a single sports team.<ref name=OED/>