{{#invoke:redirect hatnote|redirect}} {{ safesubst:#invoke:Unsubst||$N=Use dmy dates |date=__DATE__ |$B= }} {{ safesubst:#invoke:Unsubst||$N=Refimprove |date=__DATE__ |$B= {{#invoke:Message box|ambox}} }} A drum kit (primarily US English), drum set (primarily UK & Australian English),<ref>Peckman, Jonathan (2007). Picture Yourself Drumming, p.30. ISBN 1-59863-330-9.</ref> trap set, or just drums is a collection of drums and other percussion instruments set up to be played/struck by a single player. A musician who plays a drum kit is called a drummer<ref>{{#invoke:citation/CS1|citation |CitationClass=web }}</ref>

All of these are classed as non-pitched percussion, allowing for the music to be scored using percussion notation, for which a loose semi-standardized form exists for the drum kit. If some or all of them are replaced by electronic drums, the scoring and most often positioning remains the same, allowing a standard teaching approach. The drum kit is usually played seated on a drum stool or throne. The drum kit differs in general from those traditional instruments that produce melody or chords/pitch per se: even though drums are often placed musically alongside others that do, such as the piano or stringed instruments. (See Peter Magadini "The Drummers Guide to Music theory",2004,published by Hal Leonard, on the 'Elements of Music' & 'Form'pp. 6–18;48–52)

Many drummers extend their kits from this basic pattern, adding more drums, more cymbals, and many other instruments including pitched percussion. In some styles of music particular extensions are normal, for example double bass drums in heavy metal music. On the other extreme but more rarely, some performers omit elements from even the basic setup, also dependent on the style of music and individual preferences. 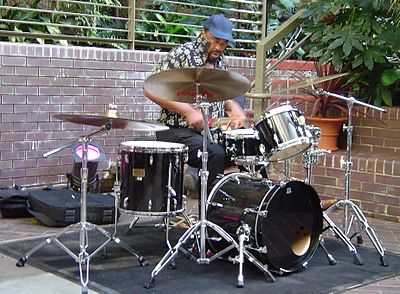