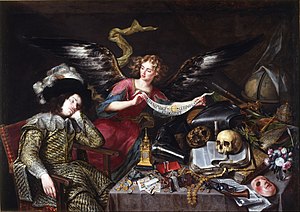 Dreams are successions of images, ideas, emotions, and sensations that occur usually involuntarily in the mind during certain stages of sleep.<ref>{{#invoke:citation/CS1|citation |CitationClass=web }}</ref> The content and purpose of dreams are not definitively understood, though they have been a topic of scientific speculation, as well as a subject of philosophical and religious interest, throughout recorded history. The scientific study of dreams is called oneirology.<ref>{{#invoke:Citation/CS1|citation |CitationClass=journal }}</ref>

Dreams mainly occur in the rapid-eye movement (REM) stage of sleep—when brain activity is high and resembles that of being awake. REM sleep is revealed by continuous movements of the eyes during sleep. At times, dreams may occur during other stages of sleep. However, these dreams tend to be much less vivid or memorable.<ref name=hobson>Hobson, J.A. (2009) REM sleep and dreaming: towards a theory of protoconsciousness, Nature Reviews, 10(11)</ref>

The length of a dream can vary; they may last for a few seconds, or approximately 20–30 minutes.<ref name=hobson/> People are more likely to remember the dream if they are awakened during the REM phase. The average person has three to five dreams per night, and some may have up to seven;<ref>Empson, J. (2002). Sleep and dreaming (3rd ed.)., New York: Palgrave/St. Martin's Press</ref> however, most dreams are immediately or quickly forgotten.<ref>Cherry, Kendra. (2015). "10 Facts About Dreams: What Researchers Have Discovered About Dreams." About Education: Psychology. About.com.</ref> Dreams tend to last longer as the night progresses. During a full eight-hour night sleep, most dreams occur in the typical two hours of REM.<ref>{{#invoke:citation/CS1|citation |CitationClass=web }}</ref>

In modern times, dreams have been seen as a connection to the unconscious mind. They range from normal and ordinary to overly surreal and bizarre. Dreams can have varying natures, such as being frightening, exciting, magical, melancholic, adventurous, or sexual. The events in dreams are generally outside the control of the dreamer, with the exception of lucid dreaming, where the dreamer is self-aware.<ref>{{#invoke:citation/CS1|citation |CitationClass=web }}</ref> Dreams can at times make a creative thought occur to the person or give a sense of inspiration.<ref>Domhoff, W. (2002). The scientific study of dreams. APA Press</ref>

Opinions about the meaning of dreams have varied and shifted through time and culture. Most people today appear to endorse the (Freudian) theory of dreams - that dreams reveal insight into hidden desires and emotions, rather than other prominent theories include those suggesting that dreams assist in memory formation, problem solving, or simply are a product of random brain activation.<ref name=":0">{{#invoke:Citation/CS1|citation |CitationClass=journal }}</ref> The earliest recorded dreams were acquired from materials dating back approximately 5000 years, in Mesopotamia, where they were documented on clay tablets. In the Greek and Roman periods, the people believed that dreams were direct messages from one and/or multiple deities, from deceased persons, and that they predicted the future. Some cultures practiced dream incubation with the intention of cultivating dreams that are of prophecy.<ref>{{#invoke:citation/CS1|citation |CitationClass=book }}</ref>

Sigmund Freud, who developed the discipline of psychoanalysis, wrote extensively about dream theories and their interpretations in the early 1900s.<ref>Freud, S. (1900). The interpretation of dreams. London: Hogarth Press</ref> He explained dreams as manifestations of our deepest desires and anxieties, often relating to repressed childhood memories or obsessions. Furthermore, he believed that virtually every dream topic, regardless of its content, represented the release of sexual tension.<ref>{{#invoke:citation/CS1|citation |CitationClass=book }}</ref> In The Interpretation of Dreams (1899), Freud developed a psychological technique to interpret dreams and devised a series of guidelines to understand the symbols and motifs that appear in our dreams.