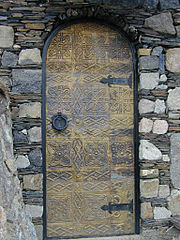 A door is a moving structure used to block off, and allow access to, an entrance to or within an enclosed space, such as a building or vehicle. Similar exterior structures are called gates. Typically, doors have an interior side that faces the inside of a space and an exterior side that faces the outside of that space. While in some cases the interior side of a door may match its exterior side, in other cases there are sharp contrasts between the two sides, such as in the case of the vehicle door. Doors normally consist of a panel that swings on hinges or that slides or spins inside of a space.

When open, doors admit people, animals, ventilation or light. The door is used to control the physical atmosphere within a space by enclosing the air drafts, so that interiors may be more effectively heated or cooled. Doors are significant in preventing the spread of fire. They also act as a barrier to noise. Many doors are equipped with locking mechanisms to allow entrance to certain people and keep out others. As a form of courtesy and civility, people often knock before opening a door and entering a room.

Doors are used to screen areas of a building for aesthetics, keeping formal and utility areas separate. Doors also have an aesthetic role in creating an impression of what lies beyond. Doors are often symbolically endowed with ritual purposes, and the guarding or receiving of the keys to a door, or being granted access to a door can have special significance.<ref>See, for example the doorkeeping duties of the Gentleman Usher of the Black Rod.</ref> Similarly, doors and doorways frequently appear in metaphorical or allegorical situations, literature and the arts, often as a portent of change.