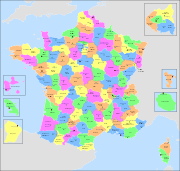 The 101 departments of France

In the administrative divisions of France, the department (French: département{{#invoke:Category handler|main}}, pronounced: [depaʁtəmɑ̃]) is one of the three levels of government below the national level ("territorial collectivities"), between the 27 administrative regions and the commune. There are 96 departments and one metropole with territorial collectivity status in metropolitan France and 5 overseas departments, which also are classified as regions. Departments are further subdivided into 335 arrondissements, themselves divided into cantons; the latter two have no autonomy and are used for the organisation of police, fire departments and sometimes elections.

Each department is administered by an elected body called a departmental council (conseil départemental (sing.), conseils départemantaux (plur.)). Before March 2015, they were called general councils (conseil général (sing.), conseils généraux (plur.)).<ref>{{#invoke:citation/CS1|citation |CitationClass=citation }}</ref> Each council has a president. Their main areas of responsibility include the management of a number of social and welfare allowances, of junior high school (collège) buildings and technical staff, of local roads and school and rural buses, and a contribution to municipal infrastructures. Local services of the State administration are traditionally organised at departmental level, where the prefect represents the government; however, regions have gained importance in this regard since the 2000s, with some department-level services merged into region-level services.

The departments were created in 1791 as a rational replacement of Ancien Régime provinces in view of strengthening national unity; the title "department" is used to mean a part of a larger whole. Almost all of them were therefore named after rivers, mountains or coasts rather than after historical or cultural territories which could have their own loyalties. The division of France into departments was a project particularly identified with the French revolutionary leader the Abbé Sieyès, although it had already been frequently discussed and written about by many politicians and thinkers. The earliest known suggestion of it is from 1764 in the writings of d'Argenson. They have inspired similar divisions in many countries, some of them former French colonies.

All French departments have a two-digit number, the "Official Geographical Code", allocated by the Institut national de la statistique et des études économiques. This is used, for example, in postal code and was until recently used for all vehicle registration plates. It is common for a resident to use the numbers to refer to their department or neighbouring ones, though it is unlikely to be used for more distant departments since few people know the numbers of departments outside their area. For example, an inhabitant of the Department of the Loiret can refer to their department as "the 45".

In 2014, President François Hollande proposed to abolish departmental councils by 2020, which would maintain the departments as administrative divisions, but transfer their powers to other levels of governance. This reform project has since been abandoned.