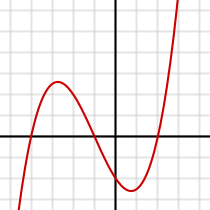 Graph of a cubic function with 3 real roots (where the curve crosses the horizontal axis—where y = 0) (and hence no complex roots). The case shown has two critical points. Here the function is ƒ(x) = (x3 + 3x2 − 6x − 8) / 4. There would be only one real root, and two complex roots, if the local minimum were above the x axis, or if the local maximum were below the x axis, or if there were no local minimum or maximum and the inflection point were off the x axis.

In algebra, a cubic function is a function of the form

where a is nonzero. In other words, a cubic function is defined by a polynomial of degree three.

Setting ƒ(x) = 0 produces a cubic equation of the form:

Usually, the coefficients a, b, c, d are real numbers. However much of the theory of cubic equations for real coefficients applies to other types of coefficients (such as complex ones).<ref>Exceptions include fields of characteristic 2 and 3.</ref>

Solving the cubic equation is equivalent to finding the particular value (or values) of x for which ƒ(x) = 0. There are various methods to solve cubic equations. The solutions of a cubic equation, also called roots of the cubic function, can always be found algebraically. (This is also true of a quadratic or quartic (fourth degree) equation, but no higher-degree equation, by the Abel–Ruffini theorem). The roots can also be found trigonometrically. Alternatively, one can find a numerical approximation of the roots in the field of the real or complex numbers such as by using root-finding algorithms like Newton's method.