In popular music, a cover version or cover song, or simply cover, is a new performance or recording of a previously recorded, commercially released song by someone other than the original artist or composer.

Originally, Billboard and other magazines that track the popularity of musical artists and hit tunes measured the sales success of the published tune, not just recordings of it. Later, they tracked the airplay that songs achieved, some cover versions being more successful recording(s) than the original song(s).{{ safesubst:#invoke:Unsubst||date=__DATE__ |$B= {{#invoke:Category handler|main}}{{#invoke:Category handler|main}}[citation needed] }} Cover versions of well-known, well-liked tunes are often recorded by new or up-and-coming artists to achieve initial success when their unfamiliar original material would be less likely to be successful. Before the onset of rock 'n' roll in the 1950s, songs were published and several records of a song might be brought out by singers of the day, each giving it their individual treatment. Cover versions could also be released as an effort to revive the song's popularity among younger generations of listeners after the popularity of the original version has long since declined over the years. 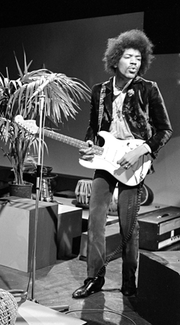 On occasion, a cover can become more popular and well known than the original, such as Elvis Presley's version of Carl Perkins' original version of "Blue Suede Shoes," Santana's version in 1970 of Peter Green's and Fleetwood Mac's 1968 song "Black Magic Woman," or Jimi Hendrix's version of Bob Dylan's "All Along the Watchtower."<ref>{{#invoke:citation/CS1|citation |CitationClass=web }}</ref> The Hendrix version, released six months after Dylan's original, became a Top 10 single in the UK in 1968 (US number 20) and was ranked 48th in Rolling Stone magazine's 500 Greatest Songs of All Time. Another famous example is the Beatles' cover of "Twist and Shout", originally by the Isley Brothers, and, to a lesser extent, their cover of the song, "Til There Was You", by Meredith Willson, among many others.