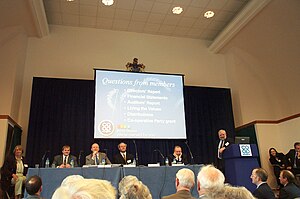 The volunteer board of a retail consumers' cooperative, such as the former Oxford, Swindon & Gloucester Co-op, is held to account at an Annual General Meeting of members

In short, a co-op is defined as "a jointly owned enterprise engaging in the production or distribution of goods or the supplying of services, operated by its members for their mutual benefit, typically organized by consumers or farmers."<ref>{{#invoke:citation/CS1|citation |CitationClass=web }}</ref> Co-operatives frequently have social goals which they aim to accomplish by investing a proportion of trading profits back into their communities. As an example of this, in 2013, retail co-operatives in the UK invested 6.9% of their pre-tax profits in the communities in which they trade as compared with 2.4% for other rival supermarkets.<ref>{{#invoke:citation/CS1|citation |CitationClass=web }}</ref>

The International Co-operative Alliance was the first international association formed by the cooperative movement. It includes the World Council of Credit Unions. A second organization was formed later in Germany, the International Raiffeisen Union. In the United States, the National Cooperative Business Association (NCBA) serves as the sector's oldest national membership association. It is dedicated to ensuring that cooperative businesses have the same opportunities as other businesses operating in the country and that consumers have access to cooperatives in the marketplace. A U.S. National Cooperative Bank was formed in the 1970s. By 2004, a new association focused on worker co-ops was founded, the United States Federation of Worker Cooperatives.

In 2012 the turnover of the largest 300 co-operatives in the world reached $2.2 trillion – which, if they were a country, would make them the seventh largest.<ref>{{#invoke:citation/CS1|citation |CitationClass=web }}</ref>