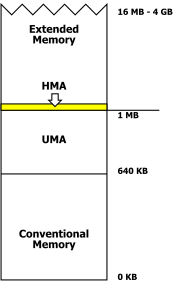 In DOS memory management, conventional memory, also called base memory, is the first 640 kilobytes (640 × 1024 bytes) of the memory on IBM PC or compatible systems. It is the read-write memory directly addressable by the processor for use by the operating system and application programs. As memory prices rapidly declined, this design decision became a limitation in the use of large memory capacities until the introduction of operating systems and processors that made it irrelevant.

The 640 KB barrier is an architectural limitation of IBM and IBM PC compatible PCs. The Intel 8088 CPU, used in the original IBM PC, was able to address 1 MB (220 bytes), since the chip offered 20 address lines.

In the design of the PC, the memory below 640 KB was for random-access memory on the motherboard or on expansion boards. The 384 KB above was reserved for system use and optional devices. This upper portion of the 8088 address space was used for the ROM BIOS, additional read-only memory, BIOS extensions for fixed disk drives and video adapters, video adapter memory, and other memory-mapped input and output devices.

The design of the original IBM PC placed the Color Graphics Adapter (CGA) memory map and other hardware in the 384 KB upper memory area (UMA). The need for more RAM grew faster than the needs of hardware to utilize the reserved addresses, which resulted in RAM eventually being mapped into these unused upper areas to utilize all available addressable space. This introduced a reserved "hole" (or several holes) into the set of addresses occupied by hardware that could be used for arbitrary data. Avoiding such a hole was difficult and ugly and not supported by MS-DOS or most programs that could run on it. Later, space between the holes would be used as upper memory blocks (UMBs).

To maintain compatibility with older operating systems and applications, the 640 KB barrier remained part of the PC design even after the 8086/8088 had been replaced with the Intel 286 processor, which could address up to 16 MB of memory in Protected mode. The 1 MB barrier also remained as long as the 286 was running in Real mode, since MS-DOS required Real mode which uses the segment and offset registers in an overlapped manner such that addresses with more than 20 bits are not possible. It is still present in IBM PC compatibles today if they are running in Real mode such as used by MS-DOS. The most modern Windows-based PCs even still have the "hole" in RAM in the area between 640 and 1024 KBs, which however is invisible to application programs thanks to paging and virtual memory.{{ safesubst:#invoke:Unsubst||date=__DATE__ |$B= {{#invoke:Category handler|main}}{{#invoke:Category handler|main}}[citation needed] }}

A similar 3 GB barrier exists, which reduces 32-bit addressing from 4 GB to ~3 GB on motherboards that use memory mapped I/O. However, due to applications not assuming that the 3–4 GB range is reserved, there is no need to retain this addressing for compatibility, and thus the barrier is easily removed by using a separate address bus for hardware, and only affects a relatively small number of computers of the 386 era as contemporary Memory Controllers and Buses (e.g. Industry Standard Architecture) could only reach 16 Megabytes. (Some motherboards feature a "Memory Hole at 15 Megabytes" option required for certain VGA video cards that require exclusive access to one particular megabyte for video memory.) Newer Video cards on AGP (PCI memory space) bus can have 256MB memory with 1GB aperture size.