A conspiracy theory is an explanatory hypothesis that accuses two or more persons, a group, or an organization of having caused or covered up, through secret planning and deliberate action, an event or situation which is typically taken to be illegal or harmful. Although the term "conspiracy theory" has acquired a derogatory meaning over time and is often used to dismiss or ridicule beliefs in conspiracies,<ref>"20th Century Words" (1999) John Ayto, Oxford University Press, p. 15.</ref> it has also continued to be used to refer to actual, proven conspiracies, such as United States President Richard Nixon and his aides conspiring to cover up the Watergate scandal in the 1970s. 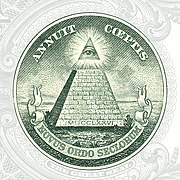 The Eye of Providence, or the all-seeing eye of God, seen here on the US $1 bill, has been taken by some to be evidence of a conspiracy involving the founders of the United States.