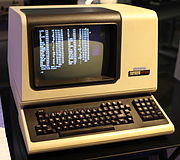 A computer terminal is an electronic or electromechanical hardware device that is used for entering data into, and displaying data from, a computer or a computing system. Early terminals were inexpensive devices but very slow compared to punched cards or paper tape for input, but as the technology improved and video displays were introduced, terminals pushed these older forms of interaction from the industry. A related development was timesharing systems, which evolved in parallel and made up for any inefficiencies of the user's typing ability with the ability to support multiple users on the same machine, each at their own terminal.

The function of a terminal is confined to display and input of data; a device with significant local programmable data processing capability may be called a "smart terminal" or fat client. A terminal that depends on the host computer for its processing power is called a "dumb terminal" or thin client. A personal computer can run terminal emulator software that replicates the function of a terminal, sometimes allowing concurrent use of local programs and access to a distant terminal host system.