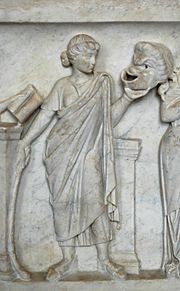 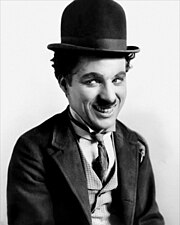 In a modern sense, comedy (from the Greek: κωμῳδία{{#invoke:Category handler|main}}, kōmōidía) refers to any discourse or work generally intended to be humorous or to amuse by inducing laughter, especially in theatre, television, film and stand-up comedy. The origins of the term are found in Ancient Greece. In the Athenian democracy, the public opinion of voters was influenced by the political satire performed by the comic poets at the theaters.<ref>Henderson, J. (1993) Comic Hero versus Political Elite pp. 307–19 in {{#invoke:citation/CS1|citation |CitationClass=book }}</ref> The theatrical genre of Greek comedy can be described as a dramatic performance which pits two groups or societies against each other in an amusing agon or conflict. Northrop Frye depicted these two opposing sides as a "Society of Youth" and a "Society of the Old".<ref>(Anatomy of Criticism, 1957)</ref> A revised view characterizes the essential agon of comedy as a struggle between a relatively powerless youth and the societal conventions that pose obstacles to his hopes. In this struggle, the youth is understood to be constrained by his lack of social authority, and is left with little choice but to take recourse in ruses which engender very dramatic irony which provokes laughter.<ref>Marteinson, 2006</ref>

Satire and political satire use comedy to portray persons or social institutions as ridiculous or corrupt, thus alienating their audience from the object of their humor. Parody subverts popular genres and forms, critiquing those forms without necessarily condemning them.

Other forms of comedy include screwball comedy, which derives its humor largely from bizarre, surprising (and improbable) situations or characters, and black comedy, which is characterized by a form of humor that includes darker aspects of human behavior or human nature. Similarly scatological humor, sexual humor, and race humor create comedy by violating social conventions or taboos in comic ways. A comedy of manners typically takes as its subject a particular part of society (usually upper class society) and uses humor to parody or satirize the behavior and mannerisms of its members. Romantic comedy is a popular genre that depicts burgeoning romance in humorous terms and focuses on the foibles of those who are falling in love.