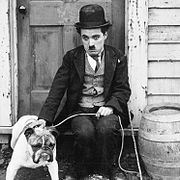 Charlie Chaplin in the film The Champion, 1915

A comedian (sometimes comedienne for a femaleUnknown extension tag "ref") or comic, is a person who seeks to entertain an audience, primarily by making them laugh. This might be through jokes or amusing situations, or acting a fool, as in slapstick, or employing prop comedy. A comedian who addresses an audience directly is called a stand-up comic.

A popular saying, variously quoted but generally attributed to Ed Wynn,<ref name=Bartleby>{{#invoke:citation/CS1|citation |CitationClass=web }}</ref> is, "A comic says funny things; a comedian says things funny", which draws a distinction between how much of the comedy can be attributed to verbal content and how much to acting and persona.

Since the 1980s, a new wave of comedy, called alternative comedy, has grown in popularity with its more offbeat and experimental style. This normally involves more experiential, or observational reporting, e.g. Alexei Sayle, Daniel Tosh, Louis C.K. and Malcolm Hardee. As far as content is concerned, comedians such as Tommy Tiernan, Des Bishop, and Joan Rivers draw on their background to poke fun at themselves, while others such as Jon Stewart, and Ben Elton have very strong political and cultural undertones.

Many comics achieve a cult following while touring famous comedy hubs such as the Just for Laughs festival in Montreal, the Edinburgh Fringe, and Melbourne Comedy Festival in Australia. Often a comic's career advances significantly when they win a notable comedy award, such as the Edinburgh Comedy Award (formerly the Perrier comedy award). Comics sometimes foray into other areas of entertainment, such as film and television, where they become more widely known; e.g., Eddie Izzard or Ricky Gervais. However, a comic's stand-up success does not guarantee a film's critical or box office success.