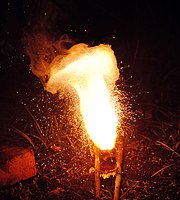 A thermite reaction using iron(III) oxide. The sparks flying outwards are globules of molten iron trailing smoke in their wake.

The substance (or substances) initially involved in a chemical reaction are called reactants or reagents. Chemical reactions are usually characterized by a chemical change, and they yield one or more products, which usually have properties different from the reactants. Reactions often consist of a sequence of individual sub-steps, the so-called elementary reactions, and the information on the precise course of action is part of the reaction mechanism. Chemical reactions are described with chemical equations, which symbolically present the starting materials, end products, and sometimes intermediate products and reaction conditions.

Chemical reactions happen at a characteristic reaction rate at a given temperature and chemical concentration. Typically, reaction rates increase with increasing temperature because there is more thermal energy available to reach the activation energy necessary for breaking bonds between atoms.

Reactions may proceed in the forward or reverse direction until they go to completion or reach equilibrium. Reactions that proceed in the forward direction to approach equilibrium are often described as spontaneous, requiring no input of free energy to go forward. Non-spontaneous reactions require input of free energy to go forward (examples include charging a battery by applying an external electrical power source, or photosynthesis driven by absorption of electromagnetic radiation in the form of sunlight).

Different chemical reactions are used in combinations during chemical synthesis in order to obtain a desired product. In biochemistry, a consecutive series of chemical reactions (where the product of one reaction is the reactant of the next reaction) form metabolic pathways. These reactions are often catalyzed by protein enzymes. Enzymes increase the rates of biochemical reactions, so that metabolic syntheses and decompositions impossible under ordinary conditions can occur at the temperatures and concentrations present within a cell.

The general concept of a chemical reaction has been extended to reactions between entities smaller than atoms, including nuclear reactions, radioactive decays, and reactions between elementary particles as described by quantum field theory.