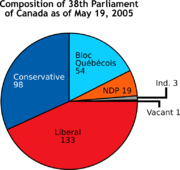 A pie chart showing the composition of the 38th Parliament of Canada.

A chart, also called a graph, is a graphical representation of data, in which "the data is represented by symbols, such as bars in a bar chart, lines in a line chart, or slices in a pie chart".<ref>Cary Jensen, Loy Anderson (1992). Harvard graphics 3: the complete reference. Osborne McGraw-Hill ISBN 0-07-881749-8 p.413</ref> A chart can represent tabular numeric data, functions or some kinds of qualitative structure and provides different info.

The term "chart" as a graphical representation of data has multiple meanings:

Charts are often used to ease understanding of large quantities of data and the relationships between parts of the data. Charts can usually be read more quickly than the raw data that they are produced from. They are used in a wide variety of fields, and can be created by hand (often on graph paper) or by computer using a charting application. Certain types of charts are more useful for presenting a given data set than others. For example, data that presents percentages in different groups (such as "satisfied, not satisfied, unsure") are often displayed in a pie chart, but may be more easily understood when presented in a horizontal bar chart.<ref>Howard Wainer (1997) 'Visual revelations: graphical tales of fate and deception from Napoleon Bonaparte to Ross Perot,Lawrence Erlbaum Associates, Inc. ISBN 0-8058-3878-3 p.87-90</ref> On the other hand, data that represents numbers that change over a period of time (such as "annual revenue from 1990 to 2000") might be best shown as a line chart.