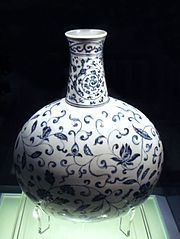 Mid-16th century ceramic tilework on the Dome of the Rock, Jerusalem

A ceramic is an inorganic, nonmetallic solid material comprising metal, nonmetal or metalloid atoms primarily held in ionic and covalent bonds. The crystallinity of ceramic materials ranges from highly oriented to semi-crystalline, and often completely amorphous (e.g., glasses). Varying crystallinity and electron consumption in the ionic and covalent bonds cause most ceramic materials to be good thermal and electrical insulators and extensively researched in ceramic engineering. Nevertheless, with such a large range of possible options for the composition/structure of a ceramic (e.g. nearly all of the elements, nearly all types of bonding, and all levels of crystallinity), the breadth of the subject is vast, and identifiable attributes (e.g. hardness, toughness, electrical conductivity, etc.) are hard to specify for the group as a whole. However, generalities such as high melting temperature, high hardness, poor conductivity, high moduli of elasticity, chemical resistance and low ductility are the norm,<ref>{{#invoke:citation/CS1|citation |CitationClass=book }}</ref> with known exceptions to each of these rules (e.g. piezoelectric ceramics, glass transition temperature, superconductive ceramics, etc.). Many composites, such as fiberglass and carbon fiber, while containing ceramic materials, are not considered to be part of the ceramic family.<ref>{{#invoke:citation/CS1|citation |CitationClass=book }}</ref>

The earliest ceramics made by humans were pottery objects, including 27,000-year-old figurines, made from clay, either by itself or mixed with other materials like silica, hardened, sintered, in fire. Later ceramics were glazed and fired to create smooth, colored surfaces, decreasing porosity through the use of glassy, amorphous ceramic coatings on top of the crystalline ceramic substrates.<ref>{{#invoke:citation/CS1|citation |CitationClass=book }}</ref> Ceramics now include domestic, industrial and building products, as well as a wide range of ceramic art. In the 20th century, new ceramic materials were developed for use in advanced ceramic engineering, such as in semiconductors.